The Xiaomi Mi Band series of wearable devices (now ‘Xiaomi Band’ with the company’s new naming scheme) is among the most successful products in the company’s catalogue. Since the launch of its first version, the Mi Band has become an industry icon.

Two of the factors that the Mi Band series has always played with is functionality and aggressive pricing. In addition, they use a design where the protagonism falls on an elongated pill. Through the new generations of products, the Mi Band pill obtained a screen, which is getting bigger and bigger and acquiring better technologies (currently being AMOLED).

Xiaomi recently released the Smart Band 7 with some changes aimed at refining the experience. But, the company is also working on the arrival of a more advanced version: the Xiaomi Band 7 Pro (or Xiaomi Smart Band 7 Pro). Now, the official release date of the long-awaited wearable is finally revealed. 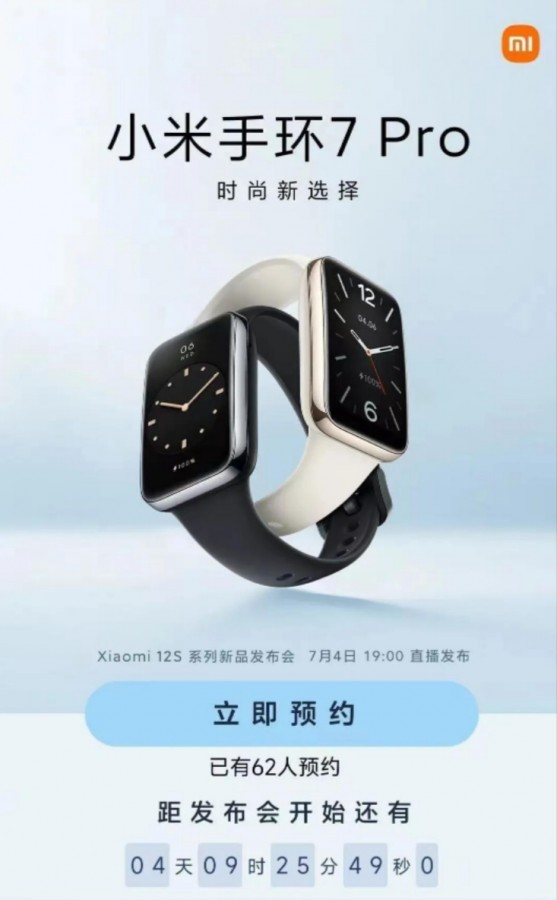 Xiaomi has scheduled a product launch event for July 4 in China. The conference is intended for the announcement of the Xiaomi 12S series. However, these phones will not be the only ones at the event. Now, the Chinese giant has confirmed that other products will also debut, including the Xiaomi Band 7 Pro.

At the moment, only the launch date on the Chinese market is known. we will have to wait a few more days to find out when it will reach international markets.

Now with a rectangular screen and a more premium look

The firm has not yet revealed the characteristics of the wearable. But, a renovation in the design is revealed that will surely please many. The future band will be the first in the line with a large rectangular screen. Unlike the Redmi Band Pro (which has a similar design), this one looks more premium.

Although the elongated pill-screen format is already a technological icon, many people will aesthetically prefer a more traditional screen that looks elegant. For them, surely the Xiaomi Band 7 Pro will be a great option.

According to rumours, the Xiaomi Band 7 Pro could be a rebranded version of the recently leaked mysterious Amazfit Band. Therefore, it would have features such as a screen with a resolution of 194 x 368 pixels, GPS, NFC and a 232 mAh battery. As for the price, it would cost in China around 499 yen (about 70 euros).