The P50 Pocket New would be Huawei’s next folding mobile

New information suggests that Huawei’s next foldable will have a name P50 Pocket New, a version that at the moment we do not find much sense; unless it is a much cheaper proposal than its predecessor.

The folding market continues to grow, and this particular manufacturer is not afraid to take risks of this type. A few weeks ago we talked about the leak of a shell-type device that interestingly would not bring a external panel, something that could have major drawbacks due to its format.

Well, what we feared seems to become a reality, since a poster has been revealed where we see only one circle for cameras. Let’s talk in detail about everything that has leaked today, in order to be clear about what we are talking about.

P50 Pocket New, a proposal that could catch on 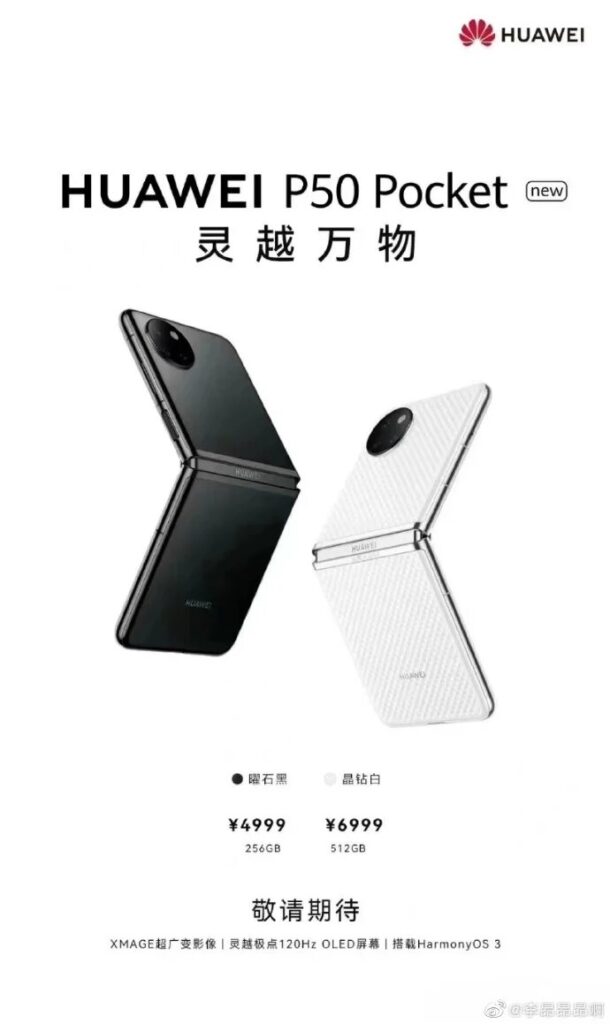 Well in Weibo a promotional image is hovering where it not only gives us a clear look at this device that is “confirmed” will have a name P50 Pocket New. In this case, the most obvious change on a physical level is the omission of the sub panel of its predecessorthis as a consequence would force the user to have to display the screen in each notification.

In this type of shell-type mobile, an external panel is essential to see notifications, interact through shortcuts, thus facilitating the use of the Smartphone in question. Really, we believe that it is a mistake that Huawei has taken the audacity to execute such a drastic change like this. On the other hand, the poster gives us relevant information about its price, remaining in 718 and 1,005 dollars to change.

What else is known?

According to various rumors, this Huawei Smartphone would come with the legendary Snapdragon 888 4G like the Pocket P50 that has been on the market for a while now. If this is so, it is likely that many of the specifications of the 2021 version will also be reflected here.

Among the most relevant characteristics could be its flexible panel with 120Hz frequencymain camera 40 megapixels, versions of 8 and 12GB of RAM; and storage up to 512GB.

In any case, it seems that the launch of this P50 Pocket New is practically a reality, so it is a matter of time before it makes its staging. Of course, we will be attentive to any relevant data that arises about this mythical manufacturer, where it is also possible to recover the acclaimed Google services on your drives.