The Nothing Phone (1) would use the Snapdragon 778G+ chip, it is tested on Geekbench - Gadget Loh

The Nothing Phone (1) would use the Snapdragon 778G+ chip, it is tested on Geekbench

The Nothing Phone (1) would use the Snapdragon 778G+ chip, it is tested on Geekbench

In the last weeks, the Nothing Phone (1) is hogging industry news. After all, it will be the first smartphone from the company of OnePlus co-founder Carl Pei. The device seems to seek to rescue the ‘hype’ and originality in an industry where monotony and generic specifications have reigned for some time.

The launch event for the Nothing Phone (1) is set for July 12. As we get closer to the date marked on the calendar for the company event, more details about it begin to emerge. The most recent news is related to the phone’s chipset and RAM capacity with which it would hit the market.

Recently, the long-awaited Nothing Phone (1) was listed on the Geekbench benchmark platform site. Thanks to this, it is revealed to us that the device in question will be powered by a Snapdragon 778G+ processor. In addition, its hardware will be completed with at least 8 GB of RAM from one of its variants. 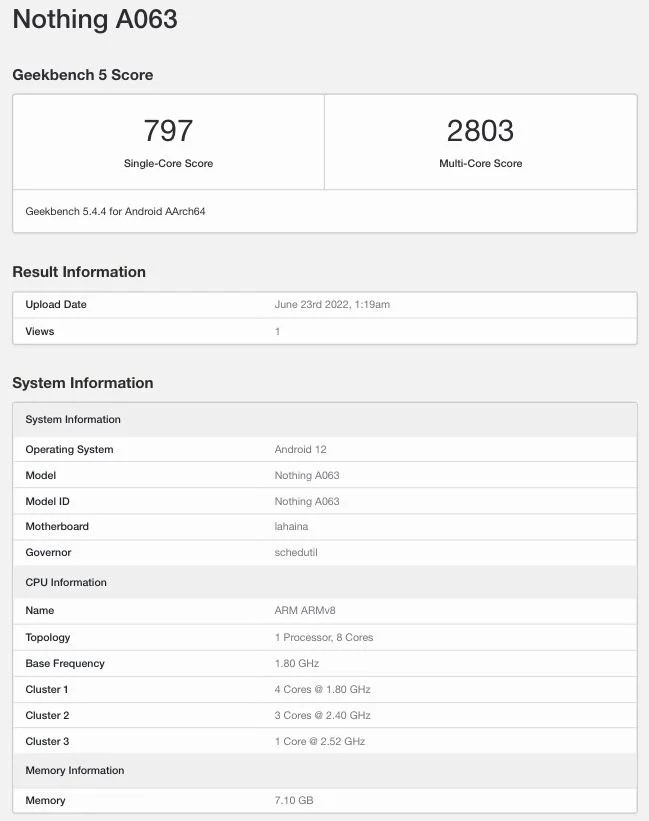 The source of the report is the MySmartPrice medium. According to the post, the Nothing Phone (1) visited the Geekbench site recently. From the listing you can see that the phone’s chipset is codenamed “Lahaina” and features a maximum clock speed of 2.52 GHz for the super high-performance single core. We may also see an additional trio of performance cores at 2.40 GHz. Finally, there will be four low-power cores at 1.80 GHz.

The Snapdragon 778G+ chip is an improvement over the standard SD778G. It increases the clock speed of the Kryo 670 Prime core from 2.4 Hz to 2.5 GHz. The biggest improvement is in its Adreno 642L GPU, which offers up to 20% more performance.

The Nothing Phone (1) on the list is equipped with 8 GB of RAM and runs Android 12. It will have a lightweight NothingOS interface that will be very similar to stock Android 12. The phone was spotted on the Geekbench website scoring 797 points in the single-core test, and 2,803 points in the multi-core test.

The processor indicates that the Telephone (1) will occupy the premium mid-range segment. It is likely to be priced similarly to OnePlus Nord devices. It should be noted that, due to previous reports, many expected him to use the new Snapdragon 7 Gen 1 chipset. But, it should be noted that the SD778G+ is made by TSMC, while the SD7 Gen 1 is produced by Samsung, whose factories caused the Snapdragon 8 Gen 1 to overheat.

The Nothing Phone (1) will be unveiled on July 12 at an event called “Back to Instinct.” The smartphone could be available in a couple of colors (black and white) and its price would be below 400 dollars.

See also  Voice notes in WhatsApp states will be a reality