The ASUS ROG flagship gaming phone series is one of the most recognized in the industry. Those users looking for phones to get the best possible gaming experience for mobile devices find these terminals a safe option. Now the company works on the next generation of the family: the ASUS ROG Phone 6.

Earlier this month, ASUS announced that the upcoming ROG Phone 6 will make its global debut on July 5. The device has already appeared in the TENAA database listings, thanks to which some of its key specifications were known.

Now, the same smartphone has appeared in the database of the Geekbench benchmark platform. This reveals key data such as your chipset, RAM capacity, and operating system, while also giving us insight into your CPU performance.

According to the listing in the database, the ROG Phone 6 will hit the market with an octa-core processor that has a maximum clock speed of 3.19 GHz. The SoC also comes with the Adreno 730 GPU. The above does not confirm that it will be equipped with the latest from Qualcomm for the high end: the new Snapdragon 8+ Gen 1 chipset.

Apart from that, the listing confirms that the device will be equipped with 16 GB of RAM in at least one of its variants. In addition, as expected, it runs the Android 12 operating system as standard under the ROG Phone interface. 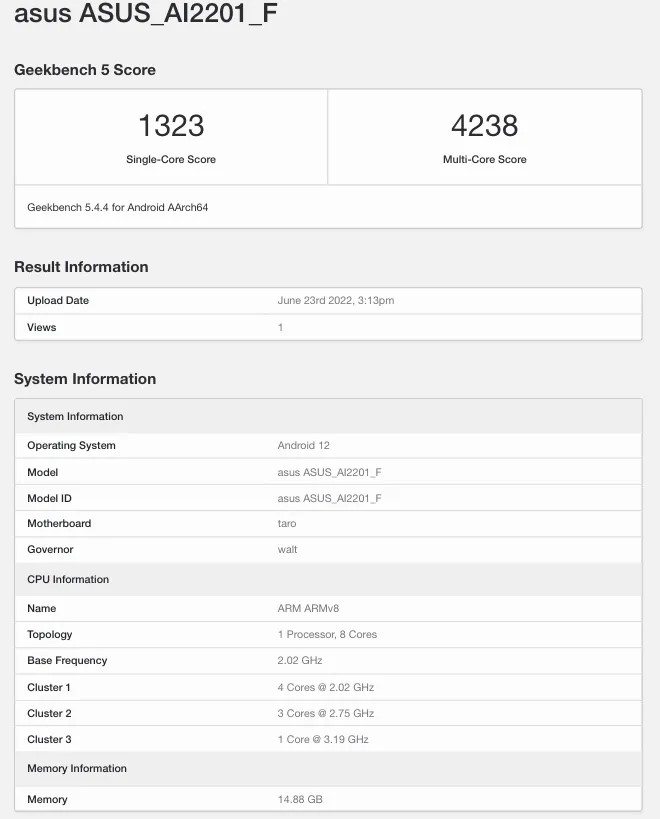 Nothing else is revealed in the listing, but previous leaks give us an idea of ​​what to do. expect from ASUS gaming phone.

The phone will feature a 6.78-inch OLED screen with Full HD+ resolution and a maximum refresh rate of 165Hz. The Snapdragon 8+ Gen 1 SoC will be paired with up to 18GB of LPDDR5 RAM.

It will be powered by a large 6,000 mAh battery with support for 65W super fast charging. As for photography, its rear camera system will be commanded by a 64-megapixel main camera. Apart from that, it is expected to bring stereo speakers, a powerful vapor chamber (VC) cooling system, and more.