Last year, Qualcomm released the chipset mobile Snapdragon 8 Gen 1 for the high-end segment. This hardware marked the debut of the company’s new product naming scheme. In line with the above, the company later launched the Qualcomm Snapdragon 7 Gen 1. This model was aimed at the premium mid-range segment.

Both of the company’s latest offerings are manufactured based on Samsung’s 4nm process. Now, it looks like the company is working on a new chipset to revamp its mid-range product lineup. It is said that this new chipset would also be based on an efficient 4nm process. Also, it will succeed the Snapdragon 600 series of chipsets.

The source of the leak is the trusted trusted informant Evan Blass. Through a publication, he shares with us many specifications and features of the upcoming Snapdragon 6 Gen 1 mobile platform. This is expected to be the successor of Snapdragon 695 chipset. The latter is a 5G chip, so the Snapdragon 6 Gen 1 should be too.


Many details and specifications of the Qualcomm Snapdragon 6 Gen 1

According to the leak, the Snapdragon 6 Gen 1 will be manufactured on a 4nm node and identified by the motherboard number SM6450. Its CPU array with Qualcomm Kryo cores is said to reach clock speeds of up to 2.2GHz. The platform will support USB 3.1 and up to 12GB of LPDDR5 RAM clocked at up to 2750MHz. 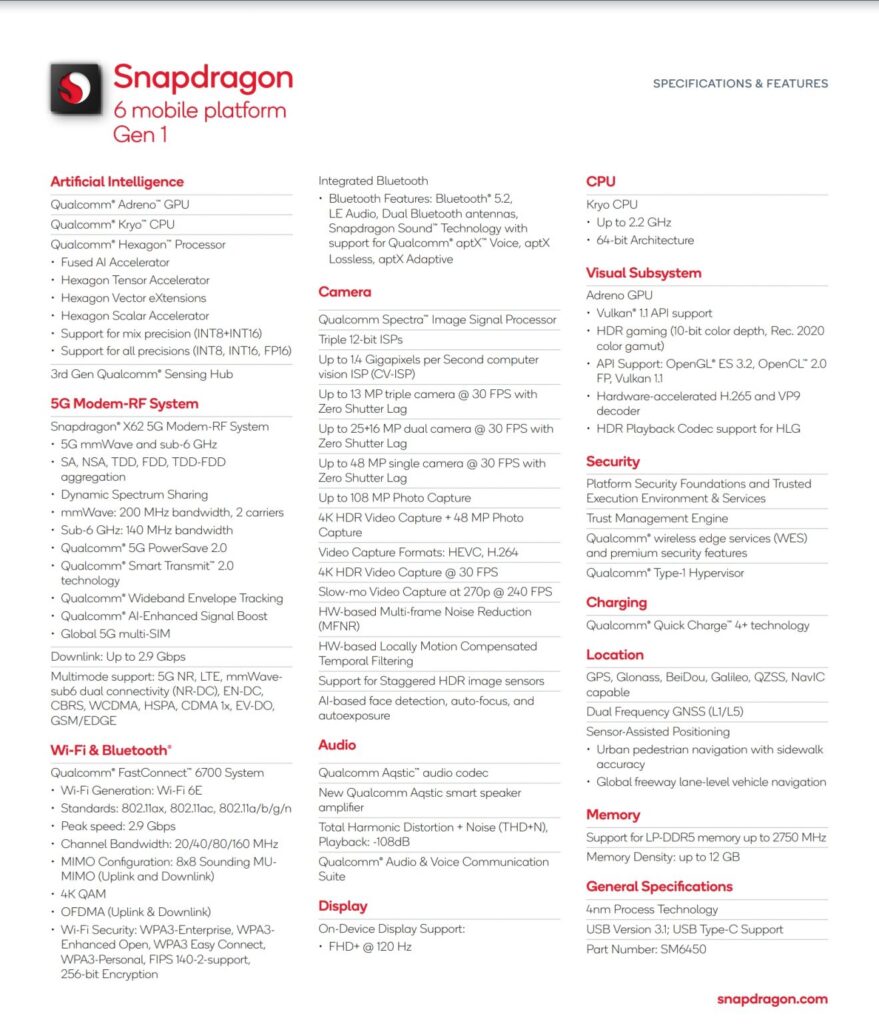 In the connectivity section, the processor will have the Snapdragon X62 5G modem. It offers support for 5G mmWave and sub-6GHz bands.

Devices equipped with the new hardware will be able to mount screens with a resolution of up to FHD+ at a refresh rate of 120 Hz. On the WiFi side, it will have Qualcomm FastConnect 6,700 WiFi 6E, and it will also be compatible with Bluetooth 5.2.

As for the cameras, the future Snapdragon 6 Gen 1 will allow manufacturers to implement a set of triple cameras with ‘Zero Shutter Lag’ of 13 megapixels, a set of double cameras of 25 + 16 megapixels and a single camera with 48 megapixels. The pictures taken can have a maximum resolution of 108 megapixels.

The leak does not reveal a release timeline for the new chipset. however, we can expect it to debut in the coming months. It will probably be accompanied by the future flagship Qualcomm Snapdragon 8 Gen 2 chipset.

See also  Nokia X30 5G, a mid-range with a Premium design and a good screen