Oppo officially revealed all the news of ColorOS 13 today. The latest version of the company’s mobile software uses Android 13 as a base and offers several changes that seek to both refine the experience and boost productivity.

With ColorOS 13, OPPO introduces a design language which they call ‘Aquamorphic’. The company claims that the design is inspired by water and its effects.

The default color palette is blue and it changes hue throughout the day, just like water during sunrise and sunset. The general colors of the system can be adapted to the wallpaper. It is still its own theme engine and not Google’s “Material You”.

The interface continues to feature cards that are now of different sizes according to the type of information and content.

This aspect is visually quite similar to ColorOS 12. But, now users can enlarge the size of the folders so that some stand out from others. Enlarging folders is also useful so you don’t have to open the entire folder to start an app. Just tapping on the icon of the required application present inside the large folder will suffice.

One notable change in ColorOS 13 is the redesign of the control center. The top is occupied with two large buttons on the left and a media player widget on the right. By default, the big buttons are for WiFi and Bluetooth, but users can customize this.

The middle section includes the remaining buttons, followed by the bottom section with the brightness slider.

The Always-On (AOD) implementation is enhanced in ColorOS 13 with more AOD styles and integration with third-party applications.

Oppo integrated a new AOD style called ‘Home’. This shows how the earth is affected by global warming. Users can choose from three styles featuring polar bears, penguins and a coral with clown fish.

As for third-party apps, Oppo has partnered with Spotify to display currently playing music along with controls and icons for the four most played playlists.

Oppo introduced PC Connect with ColorOS 12. The firm says it will add features like answering calls natively and sending/receiving messages on the computer. Added to this are existing features like notification sync, clipboard sync, and file transfer. 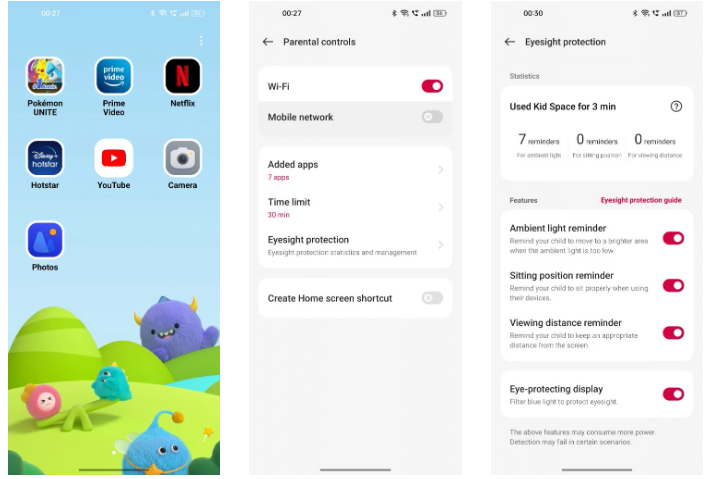 Parents can also review all the reminders issued by the phone during the Kid Space session to teach their children how to use smartphones correctly.