This chip is very similar to the existing Dimensity 9000, but with a few key improvements. The hardware platform supports displays with a refresh rate of 144Hz for WQHD+ resolution and up to 180Hz refresh rate for Full HD+ displays.

In terms of performance, the MediaTek Dimensity 9000+ comes with a 5% improvement in CPU and a 10% improvement in GPU performance. It makes use of the latest ARM v9 CPU architecture and is manufactured on TSMC’s efficient 4nm process.

The chip comes with an improved Imagiq 790 Image Signal Processor (ISP). It supports 18-bit HDR video recording from three cameras at the same time and supports up to 320-megapixel sensors for 4K HDR resolution, along with AI-powered noise reduction.

The network modem has also been upgraded and now supports peak downloads of up to 7 Gbps. It has support for 5G/4G Dual SIM Dual Active, allowing users to use both networks at the same time. In addition, there is Bluetooth 5.3, Wi-Fi 6E and the latest GNSS standard.

The first devices with the MediaTek Dimensity 9000+ will be launched in the third quarter of this year.

MediaTek also announced the new Dimensity 1050 chipset. This is the company’s first SoC to support 5G mmWave 5G networks. It will enable seamless connectivity through easy switching between Sub-6GHz and mmWave standards. It is manufactured in TSMC’s 6nm process. The first devices with the chip will arrive from the third quarter of 2022. 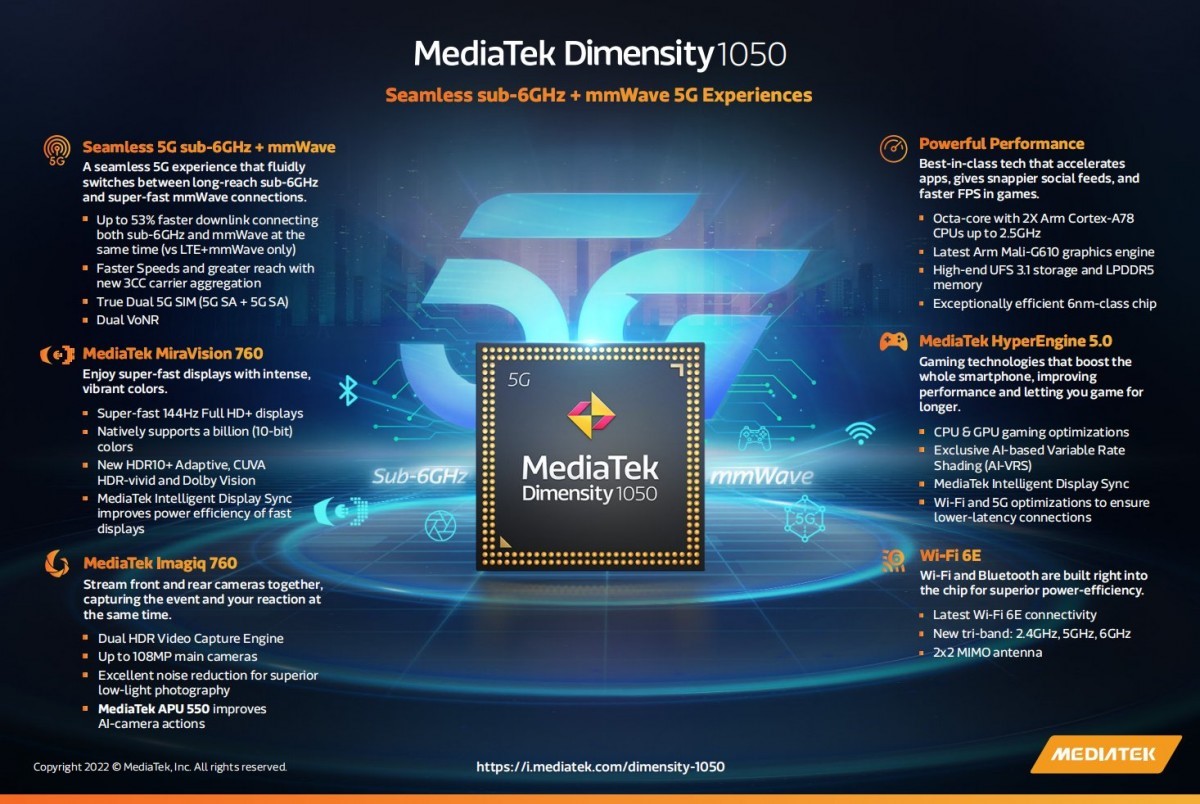 As a bonus, MediaTek brought two additional chips for mid-range and low-end phones. One is the Dimensity 930 5G, whose improvements over the 920 5G are limited to faster connectivity and support for Full HD+ 120Hz displays with HDR10+.

Finally we have the Helio G99 4G, the successor to the Helio 4G, which is now manufactured in a much more efficient 6nm process (instead of 12nm).

See also  Huawei Mate 50 would already have a presentation date